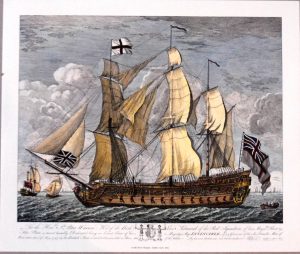 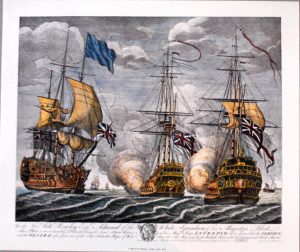 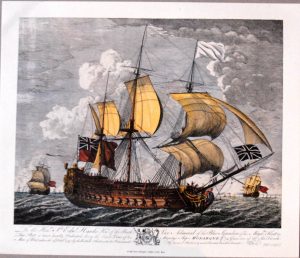 Portraits of the French and Spanish ships taken by Lord Anson Vice Admiral of the Blue), Captain Buckle and Sir Edward Hawke (Rear Admiral of the White) in two strategically important sea battles in 1747.

At this time, Britain was determined to open up Spanish America and the West Indies to trade and Spain was determined to prevent this. Meanwhile, France threatened to invade the English shore, which led to Britain declaring war on France in 1744. By 1747, the spoils of war were about even when two, hard fought sea battles off the Bay of Biscay in May and October that year changed the whole course of the struggle in Britain’s’ favour. There are surprisingly few paintings recording these two victories at sea; careful drawings of captured ships were, however, made by Robert Shaw: eight relating to ships taken from Admiral de la Jonquiere in the first battle and four taken from Admiral de l’Etenduere in the second.

There is an introduction by Deirdre Margary giving the full historical background to these sea battles.

Printed in colour in a reduced size to the original to facilitate framing.